Not sure if funny or copyright infringement: A legal take on memes

“Memes” have become an integral part of the modern online space, evoking half-smiles and occupying the mind of the average Internet user on a daily basis. Memes are created and shared at the speed of light. However, Internet users, other than those embarking on the fundamental task of legally analyzing the meme phenomenon, rarely ask the question:

Do we have the right to create, distribute and use memes?

It would be hard to believe that the answer to this is “No” given the high intensity of their use. Plus, everything which is not forbidden is allowed, right? However, to what extent are we sure that when publishing a meme on our website or when using a meme in a playful commercial campaign, we are not doing something prohibited? To answer this, we must first analyse the following:

What is the legal nature of the "meme"?

Although we traditionally treat memes as a relatively modern phenomenon, conceptually they do not differ much from their predecessors - cartoons, caricatures and the like, except that they circulate in the online space and often require minimal effort to be created. Memes, whether drawings, photographs or collages, should generally be considered works of fine or photographic art. It should be noted that the huge number of memes on the Internet are in fact edited versions of original images and as such have the character of derivative works within the meaning of the law.

When an object of art is created after someone has put their creative work into it, or in other words, what is created is "an expression of the intellectual creation of the author" (the traditional criterion used by the CJEU after the Infopaq case(2)), the object in question should benefit from copyright protection.

The principle regarding objects protected by copyright is that their use should commence with the consent of the rightholder and in exchange for remuneration.

Naturally, there are exceptions to this rule, which we must resort to in order to explain the countless unsanctioned posts of memes on social networks and all similar uses. However, it is important to conclude that the 'everything that is not explicitly prohibited is permitted' principle does not apply to the use of memes. On the contrary, the use of memes is by definition prohibited without the consent of the rightholder unless there is a legal exception to allow it. Thus, there are exceptions that allow an example of a popular scientific or journalistic text to be illustrated through the use of a meme, while being almost amusing. 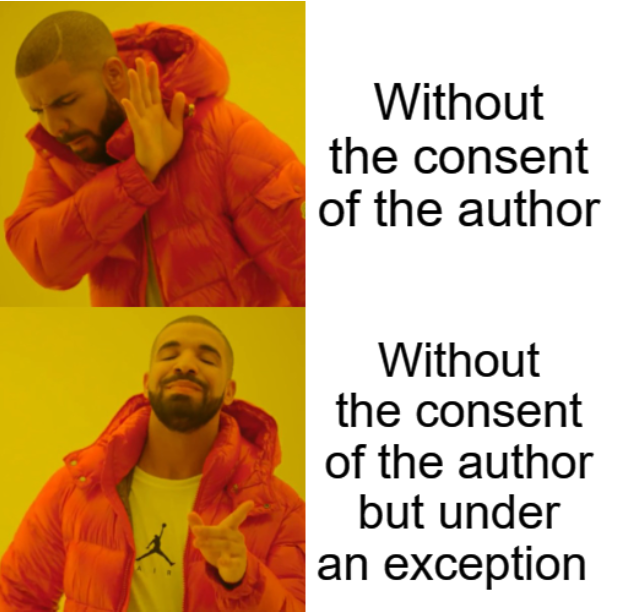 The exceptions provided by law are not few and are foreseen to preserve certain public interests related to access to information, scientific development, etc. Traditionally, the use of memes in the European Union has been perceived as being carried out for the purposes of caricature, parody or pastiche - an exception introduced in the Union by the Information Society Directive in 2001.(1)

However, an interesting fact is that to this day, the Bulgarian Copyright and Neighbouring Rights Act (CNRA) does not recognise this exception - a circumstance that can be explained by the fact that its transposition into national law has not been mandatory but rather an option.

In the context of the present article, however, this fact invariably invokes the question of whether the use of memes, to which Bulgarian law is applicable, does in fact constitute a violation.

It is difficult to give an unambiguous answer. In some cases, it is conceivable to use memes without the author's consent on the basis of other statutory exceptions, such as "criticism or review" or "analysis, commentary or other scientific research". In other situations, however (the most common), when the meme is simply a joke that involves someone else's work, the situation is problematic. Fortunately, the problem is more of a theoretical significance, as litigation over the unauthorised use of memes is not a frequent occurrence.

The situation should be clarified when the Directive on copyright and related rights in the Digital Single Market (The Directive) (3) of 2019 is finally transposed in Bulgaria. It contains an exception that is mandatory for transposition and concerns the use of works on the Internet for the purpose of caricature, parody or pastiche. The procedure for implementing the Directive in Bulgaria is at a relatively advanced stage, after the public discussion of the proposed Draft Amending and Supplementing Act of the Bulgarian CNRA (the Draft Act) proposed by the Ministry of Culture ended on 15.10.2021. The Draft Act is expected to be submitted to the next National Assembly in the near future. In its current version, it provides for the aforementioned exception, and if adopted, meme aficionados could take a rest from the legal uncertainty and rely on the noble goals of parody to share their favourite images.

However, let's not forget - the best way to be absolutely certain about our rights to use an image is to create it ourselves - from scratch, and not just by adding some text to a known picture. Once we have created our image, all that remains for it to qualify as a "meme" is to start spreading it among hundreds of thousands of people on the Internet. However, this is a factual issue, not a legal one.

Older
2021
2020
2019
2018
2017
2016
2015
We use cookies to make this site better. We also use Google Analytics to track visitor statistics. If you continue to use www.kambourov.biz, we will assume that you agree with the use of cookies. If not, you can change the browser cookie settings at any time and / or leave the site. Learn more